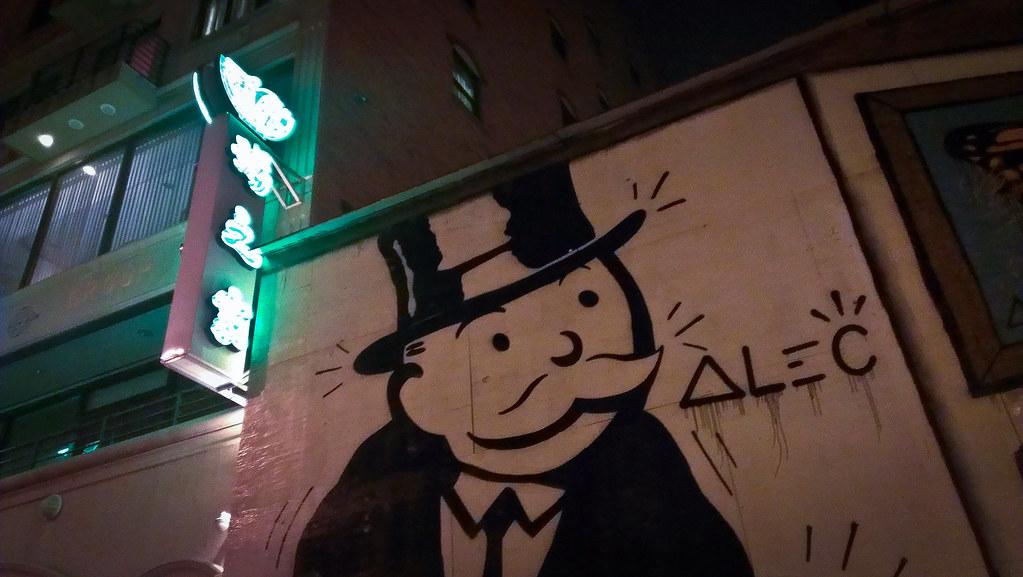 I’m starting to believe the worst is the claim that markets lead to monopoly and the accumulation of wealth in a few hands. Why? Because it makes no sense at all on the face of it and has no logical explanation, so it is indicative
of fundamental confusion and misunderstanding.

Granted, many great thinkers have been deluded by this, including Joseph Schumpeter (the old pessimist, not the young optimist). It is nevertheless a fundamental error. This error lies not in the fact that some, or even many, businessmen strive for empire, that businesses and businessmen would like and may wish for monopoly, or that they seek as much profit as possible, but in mistaking the aims of individual actors for the mechanism that they collectively comprise. This is like figuring the function of money in the economy by studying a dollar bill.

Little, if anything, will come of it, because the instance is not the function.

This difference is captured in the slogans “promarket, not pro-business” or “free market anticapitalism,” which here have similar meanings. The core of the market is voluntary exchange undertaken for private gain. But in voluntary (nonfraudulent) exchange both parties, not only one, anticipate gain. There is no transfer of wealth, but an increase on both sides.

The market comprises any and all voluntary exchanges, and sees no barriers to entry other than scarcity: you cannot trade what you do not have.

Markets ease the burden of scarcity on society by determining relative values (prices) and through them allocate resources to the most productive hands (from the perspective of consumers; i.e., value creation). In this situation, one can only accumulate wealth through production followed by an exchange that is anticipated to benefit consumers, who are the final arbiters of value. Even if one were to monopolize some valued resource, it only has value when utilized in
production. If I were to monopolize meat, I could only use this situation for my benefit by selling the meat.

The typical counterargument is that some resources are necessary for some forms of production, such that the monopolist can extract rents from the rest of the economy. This is only true in a static world, however. In a world where we learn, discover, and innovate, there are no such resources.

In fact, someone’s lasting monopoly of a treasured resource means two things: first, it is a great incentive for entrepreneurs to focus their efforts and imagination on finding alternatives (which are always possible because nothing in this world is entirely specific), and, second, it makes the monopolist relatively poorer for as long as s/he does not put the resource to use.

It is only through using the resource (i.e., using it to benefit consumers) that it becomes valuable and can generate income for the owner. In other words, it is through undermining their monopoly that the owner best serves himself. It is also through using (and, thereby, sharing) the resource that innovations that can undermine its value can be limited.

In fact, the more effectively a resource is used to satisfy consumers, the more valuable it is. Additionally, the less bothersome the monopoly is, which means that innovative efforts are directed elsewhere, the better it does.

The market simply does not offer a mechanism for monopolists to exploit consumers. The value of any resource is derived from the valuable contribution it offers to consumers, which means capital and resources are valuable because consumers determine that they are. The owner is a servant of consumers, not the other way around.

So why, then, do we see monopolies in the “market economy”?

Why do we see immense inequality?

It is not a result of voluntary exchange, because that mechanism benefits all involved by improving their positions—and society at large by producing a more beneficial resource allocation. The only reasonable and logical explanation is that something has distorted voluntary exchange. Typically, it is the burden of regulations, which almost exclusively impose costs on and restrict entry for competitors and thereby indirectly protect incumbents, who then no longer respond to consumers on fully marketable terms.

In other words, the market mechanism is partially put out of play, and therefore the outcome too is distorted. By not letting the market mechanism work fully, some of the most beneficial exchanges will no longer take place, which is a loss to those parties. As a result, some resources—especially the ones protected from competition—become relatively overvalued and offer their owners more benefit than the benefit to consumers warrants. As long as they are shielded from
(rather than subject to) the market mechanism, they can take advantage of the position.

This is the real problem of monopoly—not that someone is the sole seller or provider of a resource, but that monopolists are artificially protected and thus are no longer subject to profits from benefiting consumers. The market logic no longer applies, which is the reason we see these problems. For this to happen, a market does not need to be fully nationalized or controlled by the government. It is sufficient to circumscribe the market mechanism, and thereby direct
entrepreneurs to activities that would not otherwise have been their first choice, to cause highly distorted outcomes. The more restrictions affect the market mechanism and limit the realm of voluntary exchange, the greater the burden on consumers.

The common misconception that voluntary exchange leads to monopoly and accumulation of wealth is, consequently, the exact opposite of what follows from the logic of the market.

It is very unfortunate that so many fail to consider what mechanism could or must have caused the problems they observe. There is no conceivable way by which voluntary exchange can lead a producer to a position of “market power,” because production is valuable only because consumers think so—and this is based on their opportunity costs: the comparison of value gained versus what other value can be gained instead. A monopolist jacking up selling prices is pushing customers elsewhere, directing them to consider other options and providing entrepreneurs with increased profit incentives to find ways to serve consumers without involving the monopolist.

Only by restricting these logical outcomes can the monopolist gain market power. Such restrictions are imposed on the market, typically by the government, but they are not part of the market.