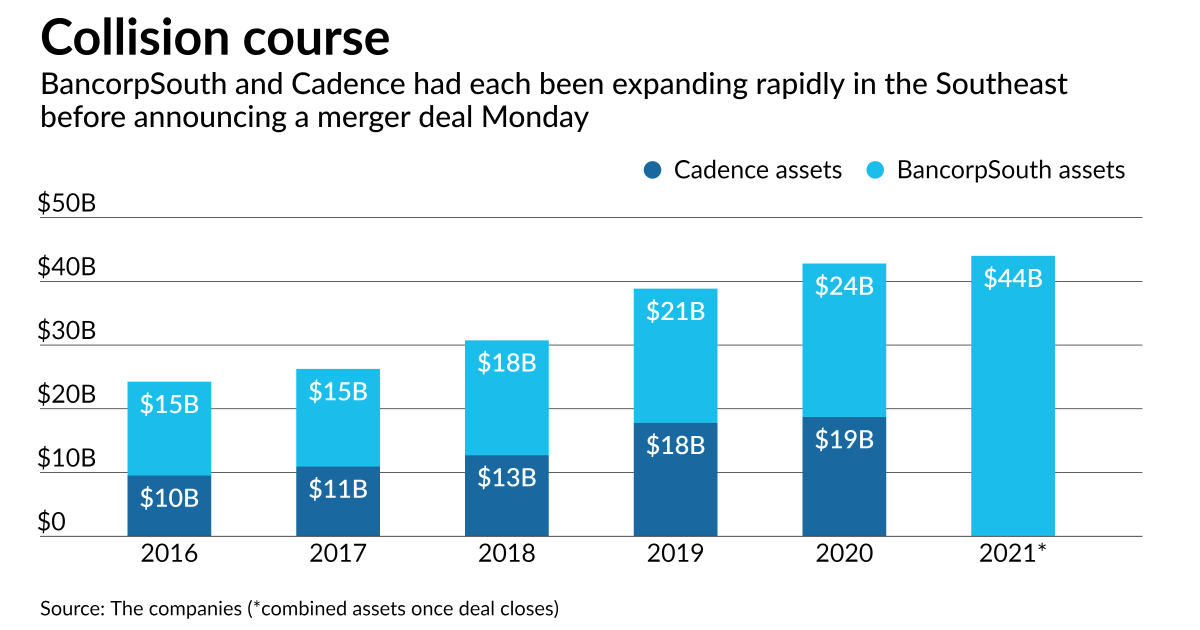 Dan Rollins has a reputation for being a serial acquirer, but BancorpSouth’s deal for Cadence Bancorp. is the biggest one he has inked — by a wide margin — in more than eight years at the Tupelo, Miss., company.

The $24 billion-asset BancorpSouth agreed on Monday to buy the $18.7 billion-asset Cadence for $2.8 billion in stock. The company’s previous 10 acquisitions totaled $6 billion of assets with a collective price of roughly $1 billion.

Cadence, which is based in Houston, will expand BancorpSouth’s footprint, marking another unusual move for Rollins, who tends to buy banks in existing markets that allow him to aggressively cut costs. There is very little overlap, and the plan is to trim just 7.3% of the combined company’s annual operating expenses.

Buying Cadence still makes sense for Rollins, who was the top lieutenant to David Zalman at Prosperity Bancshares in Houston before departing to take the top job at BancorpSouth in 2012.

Rollins also happens to be bullish on Texas.

“I would argue that’s the best part of the United States to be in,” he said in an interview. “We’ll be in four of the five fastest-growing [markets in the country]. … That puts us in a great position.”

Cadence will also provide BancorpSouth with its first branches in Atlanta, which was home to State Bank Financial. Cadence bought State Bank in 2018.

The deal is the latest to create a new regional bank in the Southeast.

“Cost savings are somewhat conservative” compared with other large mergers of equals, likely due to the “limited branch overlap and the potential for added tech spending,” John Rodis, an analyst at Janney Montgomery Scott, wrote in a Monday note to clients.

While he said the deal “appears to be a sound transaction at a reasonable price,” Rodis noted that, “given the relative size of this transaction, we believe integration risk will be higher [compared with] past deals.”

“The deal makes a lot of sense on paper, but execution is always key,” Michael Rose, who covers Cadence for Raymond James, said Monday. “I would say that Dan Rollins and his team have done a tremendous number of deals. They’re skilled integrators, but size does make a difference. There are just more pieces that can go wrong.”

Rollins, meanwhile, is keen to pursue more acquisitions after BancorpSouth integrates Cadence. The bank will retain the Cadence brand, which will make it easier for the company to continue expanding outside its home turf.

The goal would be to keep focusing on targets between southwestern Florida and central Texas, Rollins said.

“I don’t know that we have a target that we would want to go anywhere specific because there is so much opportunity to continue to consolidate within our footprint,” Rollins said.

Texas “is obviously a target-rich environment,” he added. “We both would like to be larger in the Dallas and Austin markets than we are today — but that doesn’t mean those are the only places we’ll be looking.”

Buying Cadence will turn BancorpSouth into a $44 billion-asset company, and it would allow Rollins and his team to spread out costs and investments over a much larger organization at a time when revenue is challenged. That was an M&A objective Rollins highlighted during a recent American Banker panel discussion.

M&A “is all about size and being able to spread around expenses — compliance costs, technology costs — over a bigger base,” Rollins said during the March 15 discussion.

Paul Murphy Jr., Cadence’s chairman and CEO, echoed that sentiment during a Monday conference call to discuss the deal.

“You know the story,” Murphy said. “Rates are low. The benefits of spreading technology and regulatory costs over a bigger base are compelling. Cost saves are a safe move for us. It will generate nice earnings growth for our shareholders. That’s a key driver of a transaction like this.”

The deal also comes after two years of aggressive work by Cadence to address credit issues in areas such as energy and restaurant lending that began to surface prior to the pandemic. Cadence lost $206 million last year after it set aside $278 million to cover potential loan problems and recorded a $444 million goodwill impairment charge.

Murphy said during the conference call that issues in the energy and restaurant books were under control, adding that the deal would reduce concentrations in sensitive loan sectors.

Cadence has shed more than $400 million in restaurant loans in recent years, Murphy said, adding that about three-fourths of the remaining $800 million of exposure is tied to the quick serve category, which has “performed very well during” the pandemic.

The company’s biggest energy issues have been with exploration-and-production borrowers. Those credits will decline from 2% of total loans now to about 0.8% after the merger is completed.

While its plus-sized restaurant portfolio resulted in Cadence experiencing significantly more pandemic-related problems than many other banks, there was no way for the company to predict what would happen to that book, Rollins said.

“It’s really hard to blame them for having restaurant loans,” Rollins said. “I don’t think anybody foresaw COVID coming our way to shut the economy down. The market hammered on them a little bit, but that’s not on them.”

Murphy said he and Rollins have known each other for two decades and that they have held casual discussions about a deal over the past several years. Discussions became serious last fall.

“As we looked around the industry for possible combinations … Dan and BancorpSouth were always high on our list,” Murphy said. “As we started to get more clarity about what the world was going to look like post-COVID, we started talking more seriously.”

“You have to build trust,” Rollins said during last month’s panel discussion. “The trust factor is so critical. And sometimes you know the seller already.”

According to Rose, Cadence had been rumored as an acquisition target for several months, although some of that speculation “had died down recently.”

In that sense, Monday’s announcement may have come as somewhat of a surprise, though not a big one, Rose said.

“It was kind of a widely held view this bank was built to be sold,” Rose said. “We saw the culmination of that today.”