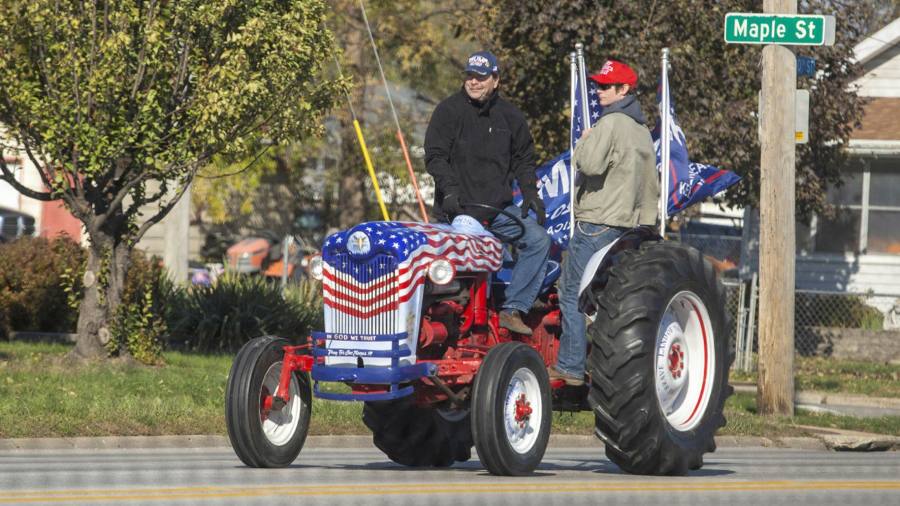 This week would be a busy one for the US even under normal circumstances. A Federal Reserve meeting, the latest jobs figures and another wave of third-quarter earnings results, all against the backdrop of rising Covid-19 cases. But add in the presidential election and it is easy to see why investors will be mainly focusing on the world’s largest ecomony over the coming days.

But there will also be plenty going on elsewhere. Several other central banks also set policy, with the Bank of England and Reserve Bank of Australia likely to draw attention, especially as the BoE is widely expected to announce further measures to prop up a flagging economic recovery.

The growth in coronavirus cases will continue to take its toll on the global economy as further restrictions to curb the pandemic are announced. England goes into national lockdown on Thursday, joining other parts of the UK and many other European countries taking tougher measures to curb the spread of Covid-19.

Outside the US, plenty of corporate big-hitters have earnings results out, with bellwether retailers Marks and Spencer and J Sainsbury of interest in the UK, particularly as Simon Roberts, Sainsbury’s new chief executive, is reported to be considering a sale of the company’s banking arm as record-low interest rates continue to threaten its profitability.

Several big pharma companies and some of the big European banks also report.

Aside from the US jobs figures, it is a fairly quiet week for data, with UK and US purchasing managers’ indices providing the other main points of interest.

Americans will vote on Tuesday to decide whether Donald Trump or Joe Biden will be president of the US.

High numbers of people are voting early, which could delay the results on the day as many state authorities are not used to handling large numbers of mail-in ballots.

As of Saturday evening, more than 90m ballots had been cast in the election already — 65 per cent of the total votes cast in 2016, suggesting massive turnout, prompting Mr Trump to raise the spectre of “bedlam” after the November 3 vote and magnifying fears the US president will challenge the result.

There is little doubt among analysts that the worst-case scenario for markets would be a contested result, leaving some investors braced for volatility.

Some strategists predict that a Biden presidency, especially if accompanied by a Democratic sweep of both chambers of Congress, would bring a far different economic approach to dealing with the pandemic than Mr Trump’s, and pave the way for a more generous fiscal stimulus package.

The Fed has repeatedly called for additional aid from legislators, with chairman Jay Powell applying considerable pressure. But four years on from Mr Trump’s shock win, investors will not be taking anything for granted.

The Federal Reserve will hold its meeting a day later than usual because of the election, with a policy announcement due at 2pm on Thursday.

Analysts expect no big changes so close to a poll, but investors will be on the lookout for any signs policymakers are preparing to adjust Fed bond purchases at a later meeting, perhaps even as soon as December.

The Bank of England announces its policy decision on Thursday after a meeting where the latest lockdown announcement over the weekend will have loomed large.

The new stay-at-home order will reinforce the case for the Monetary Policy Committee to launch a fresh round of quantitative easing. Analysts predict the central bank could add a further £50bn to £150bn to its target stock of asset purchases. But economists say this will do very little to boost growth at present — although it may ease the government’s issuance of gilts to fund further fiscal stimulus.

The bank’s new forecasts are likely to show that the summer’s rebound in growth was weaker than it expected in August, that output will at best barely grow in the fourth quarter, and that the scars left on the economy by the pandemic will be deeper and longer-lasting than hoped.

In Australia, investors expect the central bank will cut rates on Tuesday, coupled with the introduction of further quantitative easing, though the they are unsure of the exact mix.

The strength of the Australia dollar is becoming a cause of concern for the bank as it worries that this will constitute an additional hurdle to overcome to stimulate growth.

Central banks in Malaysia, Norway, Poland and the Czech Republic also meet this week, while on Tuesday Brazil and Colombia publish the minutes of their last gatherings.

Payment company PayPal is updating investors for the first time on Monday since it announced its bid to expand into cryptocurrencies. The group initially plans to offer its US-based customers the ability to buy, sell and hold bitcoin, ethereum, bitcoin cash and litecoin as it takes advantage from the shift to digital payments during the pandemic.

Fitness-tracking company Fitbit, whose $2.1bn deal with Google has caused concern among EU regulators, is reporting on Wednesday. Brussels has been investigating if users should trust the search engine group with their health data and what impact will these have on advertising.

Analysts will also look out for AstraZeneca’s results on Thursday as attention gathers around the drugmaker, which has resumed its Covid-19 vaccine trials after a participant fell ill in September.

European banks continue to report their third-quarter results this week after some of their peers opened the earnings season with a positive outlook. HSBC, Santander and Lloyds showed confidence, sharing the upbeat feeling with Wall Street’s banks.

BNP Paribas reports on Tuesday following a positive second quarter that beat market expectations. The European bank has previously said that it expects a full recovery by mid-2022 but analysts are keeping an eye on the capital assigned to cover losses in case of loan defaults. French lender Crédit Agricole will follow on Wednesday.

Loan defaults hit the Netherlands largest bank ING hard during the second quarter, leaving profits almost an 80 per cent down. Analysts will look on Thursday to see if the Amsterdam-based lender has improved its position.

Société Générale, which recently slumped to its worst quarter for more than a decade with a €1.26bn loss, is reporting on Thursday together with German lender Commerzbank.

US annuities specialist Prudential Financial, and insurers MetLife and Allianz are also reporting this week.

The state-owned oil company Saudi Aramco, which is expected to make steep cuts to its capital spending to deliver the promised dividend to shareholders, is reporting on Tuesday. Enel and Dominion Energy will follow suit on Thursday.

UK retailer Marks and Spencer, which this summer has announced it will cut 7,000 jobs and has partnered with Ocado to boost its profits, is publishing its results on Wednesday, while rival J Sainsbury will update investors on Thursday, when investors will seek more detail on the possible sale of the retailer’s banking unit, which provides products including mortgages, credit cards and insurance to more than 2m customers.

Analysts will be watching for Mondelez’s earnings on Monday as they have already witnessed a profit growth in the first half of the year when people kept snacking during lockdown. The Cadbury owner is also on the hunt to buy new healthy brands as it faces mounting criticism over an obesity surge.

It is another busy week for car companies with a full schedule line-up from Monday to Friday. Observers have praised the resilience of the sector as, together with other manufacturers, it has adapted and recovered faster than services. The week opens with Yamaha reporting on Monday and Ferrari on Tuesday.

Industrial powerhouse General Motors will issue its third-quarter results on Thursday. The group had bought an 11 per cent stake in US electric truckmaker Nikola, a move that commentators link with GM’s hope to share in the newcomer’s popularity. This decision, however, might just have had the opposite result with the scepticism towards Nikola extended to GM’s judgment.

Suzuki reports on Thursday, and Toyota and Honda on Friday.

The second wave of Covid-19 infections is painting a bleak picture for the travel industry this winter with airlines cutting back the number of flights.

Low-cost carrier Ryanair is publishing its results on Monday after it was hit by a big shareholder revolt over its chief executive’s pay. Travel company Expedia reports on Wednesday and Bookings.com on Thursday.

The US election is also expected to have significant implications for the nascent economic recovery, which has already shown early signs of stalling as the pace of jobs growth slowed in September.

On Friday, US non-farm payrolls for October are forecast to have increased by 600,000, after rising 661,000 in September. The unemployment rate is also expected to have fallen to 7.6 per cent in October, from 7.9 per cent in September.

Thursday brings the usual weekly US initial jobless claims, which continue to be closely watched during the pandemic.

US manufacturing PMI are released on Monday with services PMI published on Wednesday. The UK also releases PMI readings throughout the week.