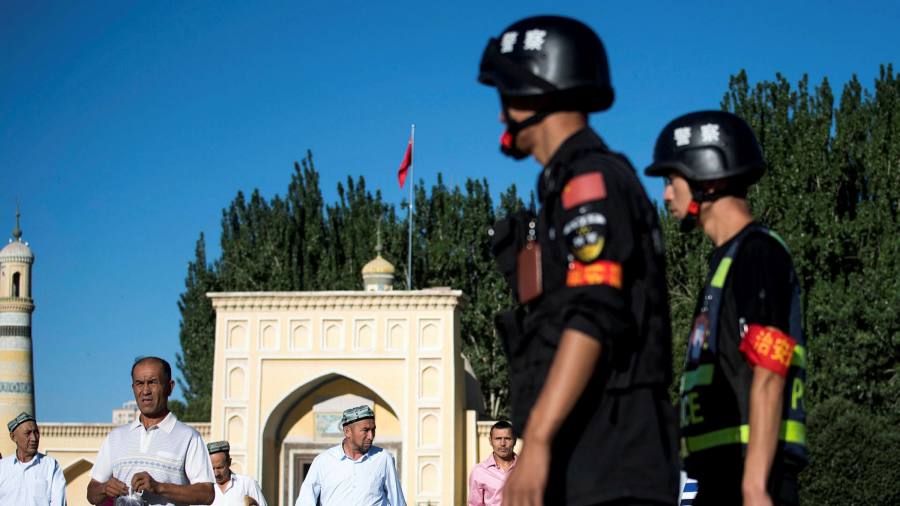 The US accused the Chinese government of turning Xinjiang into an “open-air prison” by expanding surveillance in the northwestern region in an attempt to crack down on freedom of movement for Muslim Uyghurs.

Daniel Nadel, a senior state department official, said China had widened its campaign against the Uyghurs beyond those interred in detention camps, as the US published a religious freedom report that sharply criticised Beijing’s treatment of the ethnic minority.

“Early on you saw dramatic reliance on camps . . . for re-education, for forced labour,” he said, adding that China was now engaged in an “ambitious effort to essentially turn the entire region into an open-air prison”.

The Biden administration has previously described the situation in Xinjiang, where more than 1m Uyghurs have been detained in camps, as “genocide”.

Nadel also said the US was monitoring the 2022 Beijing Winter Olympics amid calls for sponsors to boycott the event and that the Biden administration wanted to counter China’s “intent to use the games as a platform to . . . paper over their gross human rights violations”.

As Washington condemned China in the religious freedom report, the US ambassador to the UN separately criticised Beijing at an event on Xinjiang that was co-sponsored by the UK and German missions.

“We will keep standing up and speaking out until China’s government stops its crimes against humanity and the genocide of Uyghurs and other minorities in Xinjiang,” Linda Thomas-Greenfield said.

But Kenneth Roth, head of Human Rights Watch, criticised Bachelet for not attending the virtual event, which was sponsored by 18 UN member states.

“I’m sure she is busy . . . But I have a similar global mandate to defend human rights and I couldn’t think of anything more important to do than to join you here today,” he said of the Geneva-based UN official. “I certainly wasn’t deterred by the commute — all the way to my laptop.”

More than a dozen countries rebuked China, prompting an angry rebuttal from Guo Jiakun, a Chinese diplomat at the UN, who said the US was using groundless charges about Xinjiang as “a political tool to contain China”.

Christoph Heusgen, the German ambassador, accused China of using “massive” threats to pressure other countries not to attend the UN event, and echoed calls for Beijing to provide the UN with access to Xinjiang.

“If you have nothing to hide, why don‘t you finally grant unimpeded access to the high commissioner for human rights,” he said.

Separately, Antony Blinken, US secretary of state, said Washington was imposing sanctions on Yu Hui, a senior Chinese official, over alleged human rights abuses, including the arbitrary detention of members of Falun Gong, a Chinese religious movement that Beijing describes as an “evil cult”.