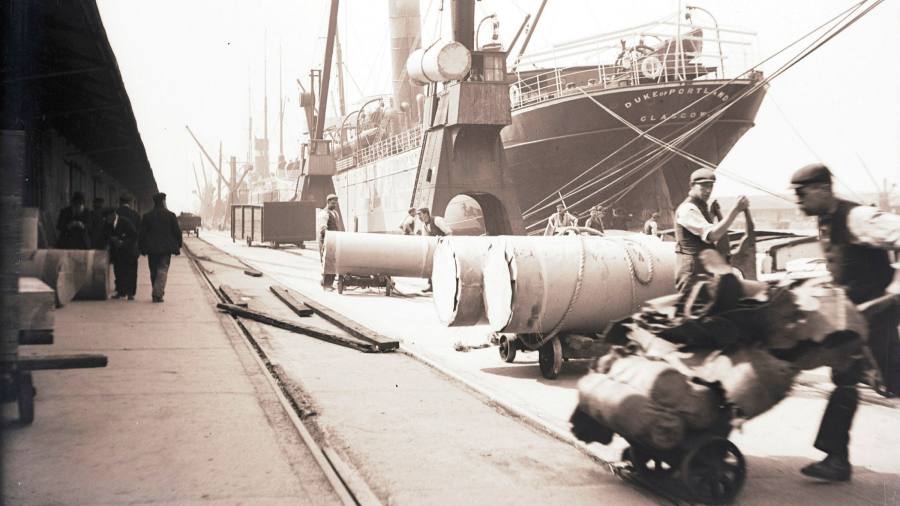 When I lived in New York, whenever I cycled on the Hudson River Greenway I would ponder the waterway’s importance to the city. The opening in 1825 of the Erie Canal linked the Hudson River to the Great Lakes and slashed the cost of moving goods from the US mid-west to the east coast’s finest natural harbour. The link would start the process of transforming New York from an important US port into the key metropolis in the modern world.

In Unlocking the World, John Darwin looks to unearth multiple similar stories from the 19th and early 20th centuries. Darwin, until last year professor of imperial and global history at the University of Oxford, argues that in the period 1830-1930, surging growth in world trade was driven by what he calls “steam globalisation”. It was, he says, access to new, steam-driven technology that gave western societies a technological edge over societies in Asia, Africa and the Americas that adopted the new techniques more slowly. The process unlocked — sometimes through genocide — huge tracts of previously sparsely populated land in places like the American prairies. It linked the new technology’s manufacturing centres to millions of potential consumers in India and China.

The work underlines how the past 50 years’ surge of globalisation has built on the previous wave that started nearly 200 years ago. It is striking how many cities he identifies as key to steam globalisation — Singapore, Hong Kong, Shanghai and Bombay (Mumbai) — have also been central to the more recent phase of global integration.

Unlocking the World also spells out how the developments it describes fuelled worldwide tensions and helped to bring about the cataclysms of the first world war and the 1930s’ retreat into protectionism.

The book mainly focuses on the traditional fare of the economic historian — which commodities sailed between which ports — rather than personalities. A non-specialist can feel bewildered by the constant toing and froing of bales of cotton or opium or tons of coal. The reader learns that the merchant class of British-ruled Singapore encouraged the settlement of Chinese immigrants in nearby parts of the Malaysian peninsula. They were needed to harvest commodities such as rubber for the port to export. But there is little glimpse of who the key individuals were in encouraging this transformative mass migration, or what the migrants themselves made of it.

Darwin chronicles the horrors of the African slave trade and labels New Orleans’ pre-civil war cotton exports “slave cotton”. But, while he seems disapproving of British India’s exports of opium to China, he leaves the degradation these exports wreaked among China’s people largely to our imaginations.

It is hard, among growing global populism and a pandemic, to read Darwin’s account and feel great optimism for the current moment

Out of the mass of trade lanes and ship tonnages there does, nevertheless, emerge a compelling picture of the societies that drove steam globalisation. Darwin argues that the cosmopolitan mixing of peoples in port cities drove the process. Such cities, he writes, tended to press for more liberal trading terms and to seek to establish strong links with a hinterland whose people would supply export goods and purchase imports.

New York benefited from railroad links that let it gradually take some of New Orleans’ natural market in the Mississippi Valley. Its financial strength reassured traders their commodities would fetch a fair price in the city and encouraged many to send cotton coastwise from New Orleans to New York before sending it on its international journey. Hong Kong flourished partly because, as a British possession on China’s doorstep, it was the ideal place to land opium — illegal in China but legal in the British empire — for smuggling across the border. The ethos of the steam globalisation era was clearly substantially shaped by its being the heyday of the generally pro-trade British empire, based in a capital that was also an open, port city society. That openness was often brutally foisted upon unwilling societies, with gunboats just as much a feature of steam power as steam packets. The effects were tremendously uneven, with parts of China, India and other less developed countries remaining mired in poverty and hunger even as the parts served by railways and waterways thrived.

Darwin argues that the recent integration of China and other developing economies into world trading networks have helped to lessen some of the inequity that the steam era left behind. But he also notes that open, outward-looking port cities were often destroyed by epidemics. It is hard, among growing global populism and a pandemic, to read Darwin’s account and feel great optimism for the current moment.