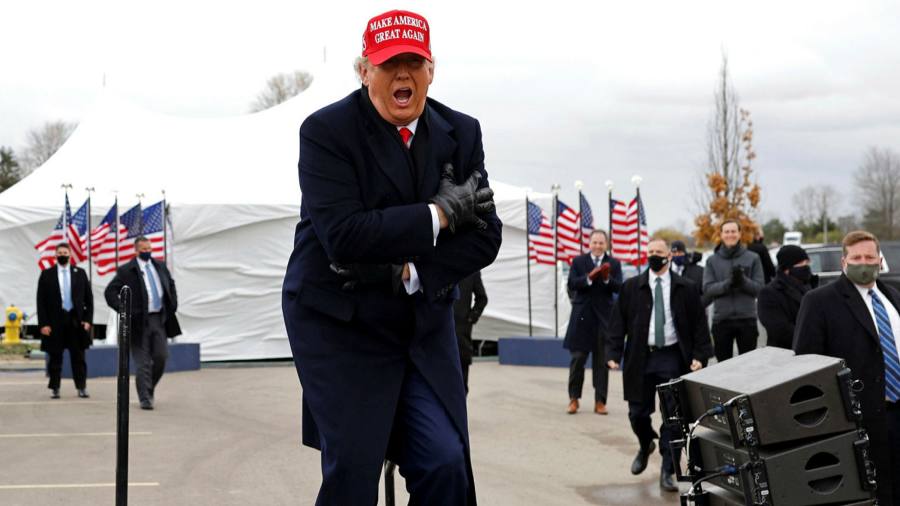 Donald Trump has threatened pre-emptive legal action against the US vote result, as polls showed the president lagging behind Democrat Joe Biden with just 48 hours until polls close.

Speaking to reporters on Sunday evening, Mr Trump denied a report that he was preparing to declare victory on election night before the country had received an official vote count. But he claimed there was potential for “fraud” and “misuse” in the vote counts for Pennsylvania and Nevada — two swing states that have Democratic governors.

“I think it’s a terrible thing when ballots can be collected after an election,” Mr Trump told reporters, referring to a Supreme Court decision which will allow ballots in Pennsylvania to be counted for up to three days after election day.

“The night of — as soon as that election is over — we are going in with our lawyers.”

As of Sunday afternoon, more than 93m ballots had been cast in the election, according to the US Elections Project, a database compiled by Michael McDonald, a professor at the University of Florida. That figure represents more than two-thirds of the total votes cast in 2016, signalling massive turnout.

“This is a 100-year flood of voters that we were seeing,” Nate Persily, a professor at Stanford Law School and former senior research director for the Presidential Commission on Election Administration, told NBC News on Sunday. He predicted up to 160m Americans would vote in the election, compared to 136.5m in 2016.

In a packed campaign schedule that began with an 11am rally in Washington, Michigan and will be bookended with an 11pm rally in Miami, Mr Trump travelled first to Michigan and Iowa before heading to North Carolina, Georgia and Florida.

While the president won all five of the states in 2016, some polls suggest he faces a more difficult path this time. A Financial Times analysis of RealClearPolitics polling averages gives Mr Biden the edge in four of the states. A Saturday Des Moines Register poll, meanwhile, gave Mr Trump a seven percentage point lead in Iowa — one of his best polls in recent weeks.

“The next red wave is coming . . . it’s going to be a wave like no one’s ever seen before . . . Tuesday is going to be beautiful,” Mr Trump told a snowy rally in Michigan on Sunday. “We’re supposed to be way down, then we catch up and we win.”

Amid the surge in early voting, many state officials warned Americans to expect a delayed result — a scenario that some Democrats worry Mr Trump could try to turn to his advantage.

Trump vs Biden: who is leading the 2020 election polls?

At a drive-through “Souls to the Polls” event in Philadelphia, meant to mobilise black Christian voters, on Sunday, Mr Biden suggested that Mr Trump was trying to disenfranchise voters.

Texas’s Supreme Court on Sunday blocked an effort by Republicans to throw out more than 120,000 votes that had been cast at 10 drive-through polling sites in the state’s largely Democratic Harris County. Republicans had argued that the drive-through polling stations were illegal in Texas and that their locations favoured Democrats. A federal district court is expected to issue an emergency ruling on the issue on Monday.

“I don’t care how hard Donald Trump tries,” Mr Biden declared in Philadelphia. “There is nothing — nothing — he is going to do to stop this nation from voting, no matter how hard he tries.”

Some competitive states, such as North Carolina and Florida, have begun counting ballots and are expected to report results sometime on election night or the day after. But others such as Michigan and Pennsylvania are not allowed to start counting ballots until election day, meaning it could take several days for states to report their totals, given the expected volume of mail-in ballots.

“The volume of voters that are coming in is like nothing we’ve ever seen before and it is going to take time to count,” Gretchen Whitmer, the Democratic governor of Michigan, told CNN on Sunday. “It’s more important that we get a count that’s accurate than a count that is fast.” A CBS News poll released on Sunday showed 66 per cent of early votes cast went for Mr Biden, while Mr Trump is expected to do better on election day itself, winning 69 per cent of the votes cast in-person that day. Because of this, it may initially appear that Mr Trump is outperforming in states, such as Michigan and Pennsylvania, before the early vote is counted.

The president and Trump campaign officials are criticising the expected lag time in results, preemptively accusing Democrats of trying to “steal” the election.

“If you speak with many smart Democrats they believe that President Trump will be ahead on election night . . . and then they’re going to try and steal it back after the election,” Jason Miller, senior adviser to the Trump campaign, told ABC News on Sunday.

“We believe that we’ll be over [the necessary number of] electoral votes on election night so no matter what they try to do, what kind of high jinks or lawsuits or whatever kind of nonsense they try to pull off, we’re still going to have enough electoral votes to get President Trump re-elected.”

In New York and New Jersey on Sunday, caravans of Trump supporters blockaded traffic with their cars on two of the region’s busiest roadways. In Texas, Democratic officials said that a bus for the Biden campaign had been forced off the road by motorists waving Trump flags and signs, forcing the campaign to cancel some of its local events.

Mr Trump has also offered stark warnings of delayed results, raising the prospect of electoral fraud in the key swing state of Pennsylvania.

“We’re going to be waiting. November 3 is going to come and go, and we’re not going to know, and you’re going to have bedlam in our country,” Mr Trump said in Newtown, Pennsylvania on Saturday. He later warned that the only way he would lose Pennsylvania was if “somebody’s going to play games”.

In the final days of the campaign, Mr Biden has focused his attacks on what he claims is Mr Trump’s gross mismanagement of the coronavirus pandemic — an area where polls show a majority of Americans believe the president has fallen short.

The number of new infections rose by 90,000 on Saturday. While this was down from a record increase of 97,000 on Friday, the total number of cases since the start of the pandemic has surged to more than 9m, according to the Covid Tracking Project.

Midwestern states comprise more than 40 per cent of the latest cases. Eleven of those 12 states had seven-day averages that were a record high on Saturday, while eight of them reported their highest level of coronavirus hospitalisations.

Mr Biden’s campaign on Saturday circulated the results of a Stanford University study that estimated that 18 of Mr Trump’s many rallies between June and September had resulted in 30,000 extra Covid-19 cases, and 700 deaths.

In the countdown to the 2020 election, stay on top of the big campaign issues with our newsletter on US power and politics with columnists Rana Foroohar and Edward Luce. Sign up here