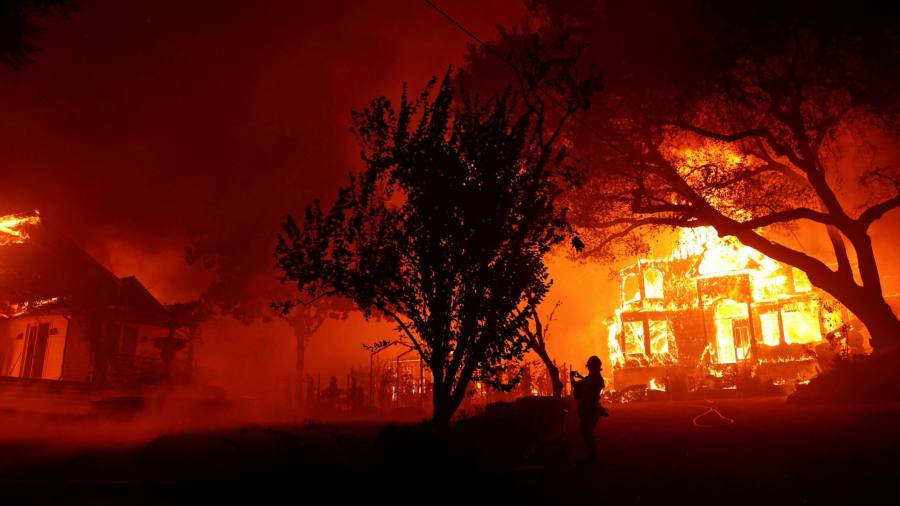 Wealthy individuals and concerned businesses are preparing to protect themselves from climate change and any new health emergency by tapping an increasingly bespoke range of personal services and snapping up private hideaways that are out of reach for ordinary citizens.

The deadly wildfires that have ravaged the US west coast and the prospect of a new disease outbreak that could outlast Covid-19 have spurred interest in a range of expensive concierge medical services, specialist real estate agents and crisis experts including Global Rescue, an evacuation response company.

Dan Richards, chief executive, said he had signed up more clients in the past five months than in the company’s entire 16-year history, adding that he had been asked to draw up plans to transfer hundreds or even thousands of employees from cities should fires or civil unrest break out.

“They’ve got real risks and real hazards that 10 years ago weren’t even on their radar,” he said. “We’ve been engaged more frequently to do things that I honestly have never contemplated.”

The destruction in California, caused by rising temperatures and lower rainfall, is among the most palpable signs of how climate change is affecting people’s lives. The World Health Organization forecasts that climate change will, between 2030 and 2050, cause 250,000 additional deaths a year, including from heat stress and greater spread of infectious diseases.

Elena Villalobos, at the WHO climate change and health programme, said the divide was not just between developed and developing countries, but between rich and poor in the same country. “It’s not about polar bears, it’s really about people suffering,” she said.

While the poor lack the resources to flee or protect themselves, the rich are starting to take action.

High-end medical practices are creating personal preventive strategies for wealthy clients, from surveying patients’ homes to ensure they are sealed from smoke to monitoring their vital signs with wearables and delivering at-home intravenous fluids and vitamins to bolster their bodies’ defences. Some refer clients to dermatologists for the effect of heat on their skin, and therapists for the anxiety produced by the disasters.

“Climate change is to the forefront of people’s minds right now,” said Abe Malkin, medical director at Concierge MD, who said demand had risen since the onset of the pandemic.

Scott Braunstein, medical director at Sollis Health, said patients were realising they needed to become “self-sufficient” because of the number of natural disasters.

Preparing for such disasters, known as “prepping”, used to be for “people on the fringes”, he explained, but it was now more mainstream. His clients were investing in survival kits and personalised cooling devices that can be worn like bulletproof vests under clothes.

Legacy Partners, which sells properties in New Zealand for a global clientele looking to escape, said it had received interest from US customers concerned about wildfires, and wealthy clients struggling with smog that affects many Asian cities.

“We’re doing all of these things to help, whether it’s to protect themselves or enhance their life, to give them longevity,” said Jim Rohrstaff, a partner at the company.

Some are thinking even more radically and approaching companies offering climate-controlled bunkers, such as the Vivos Group.

Dante Vicino, the company’s executive director, said its complex of almost 600 ex-military bunkers in the Black Hills of South Dakota had been fitted with air filters “on steroids” — which were put to the test when fires burnt in nearby Wyoming.

“Outside, man, you could smell the smoke,” he said. “But people inside their bunkers said they couldn’t tell.”

The vast majority who are unable to afford such services, however, must stay and suffer the consequences, whether it be respiratory diseases or an increased risk of premature births.

Abdul El-Sayed, an epidemiologist and former health commissioner of the city of Detroit, said there needed to be investment to prepare everyone for the public health effects of climate change.

“When rich people exit a system, it’s because it’s not working for everybody. It’s just that everyone else doesn’t have the means to exit the system,” he said.

Lisa Patel, a paediatrician at a neonatal unit in the San Francisco Bay Area, fears climate change is already taking a toll on children and expectant mothers. A study in Colorado found wildfire smoke increased the likelihood of premature birth and low birth weight.

“You have these premature babies who are born with premature lungs, which is already an insult to their lungs’ long-term development. Now on top of it, they are breathing this toxic pollution,” she said.

“This is our collective failure to prevent the effects of climate change,” she added.

In East Palo Alto, one of the Bay Area’s poorest communities, Antonio Lopez said that as the fires raged, his neighbours were stuck in homes “so hot you can’t think” but unable to afford air conditioning or open a window.

Mr Lopez, who is running for city council, fears his community was a “black box”, without proper data collection on how smoke was affecting their health. “The onus is on leadership to make it an issue,” he said.

Josh Karliner, a director at Health Care Without Harm, which pushes the medical sector to reduce its carbon footprint, said that while the health effects of climate change were less obvious than the pandemic, it was no less of an emergency.

“It’s almost like a dress rehearsal for the coming climate crisis, which in many ways will be much more serious than this pandemic in terms of its health impacts around the world,” he said.