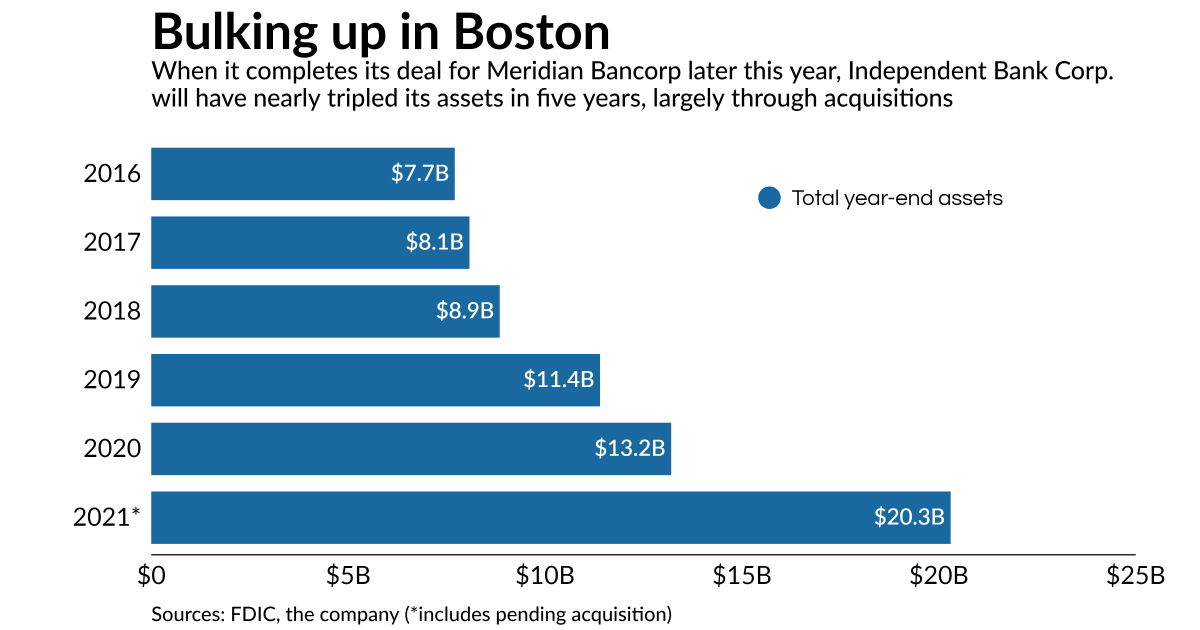 The $13.8 billion-asset Independent, the parent of Rockland Trust, said in a press release Thursday that it will pay nearly $1.2 billion in stock for the $6.5 billion-asset parent of East Boston Savings Bank. The deal, which is expected to close in the fourth quarter, priced Meridian at 150% of its tangible book value.

“This merger is consistent with our strategy of acquiring banks in overlapping and adjacent markets who share our relationship-focused style of banking,” Christopher Oddleifson, Independent’s president and CEO, said in the release.

“In addition to the market leading commercial lending capabilities, this acquisition will further enhance our core deposit franchise value and allow for the expansion of [our] broad financial product set to an expanded business and consumer customer base,” Oddleifson added.

The deal would be Independent’s sixth in eastern Massachusetts since 2015. East Boston Savings has 42 branches, three loan centers, $5.3 billion of loans and $5.1 billion of deposits.

It is the latest in a series of acquisitions involving Boston-area banks.

The Independent-Meridian deal is expected to be 7.9% accretive to Independent’s tangible book value and 23% accretive to its 2022 earning per share, taking into account planned cost savings.

Independent plans to cut 45% of Meridian’s annual noninterest expenses, or roughly $45 million. The company said it expects to incur $64 million of merger-related expenses.

Richard Gavegnano, Meridian’s president and CEO, would serve as a business consultant to Independent for three years after the deal closes.

“We think the price paid was reasonable,” Mark Fitzgibbon, an analyst at Piper Sandler, wrote in a note to clients.

“Independent has a history of doing smart, accretive, low-risk transactions in its backyard,” Fitzgibbon added. “They are adept at extracting large cost synergies … and cross-selling the target institutions customers their broader array of products and services. We have no reason to think this transaction will be any different.”

This story has been updated.