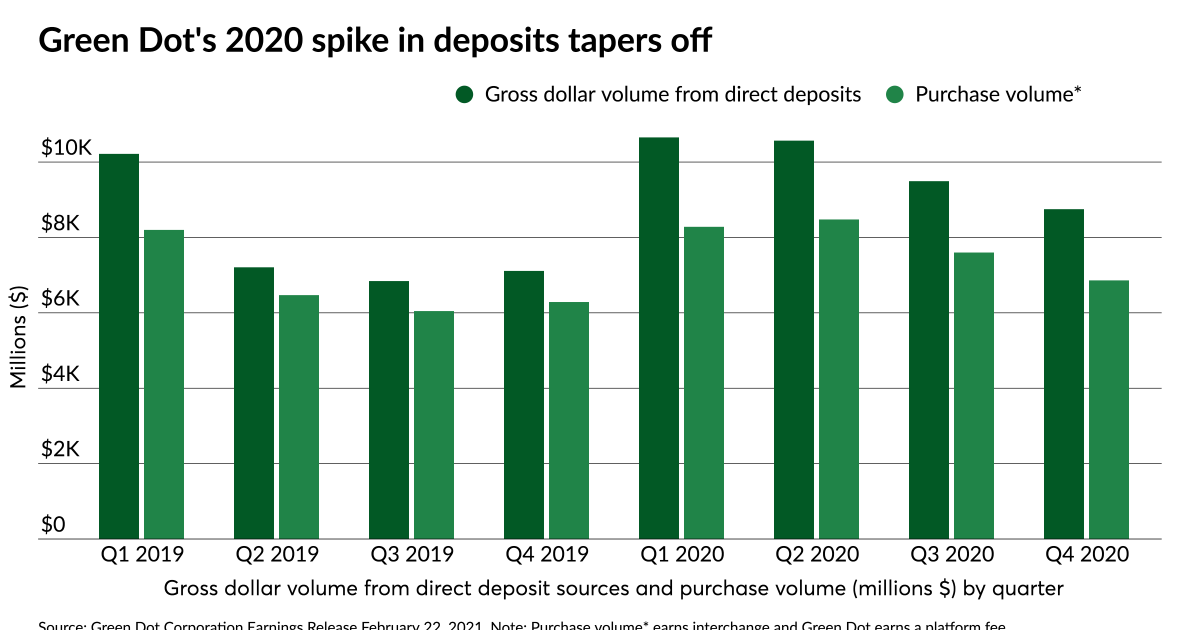 As Dan Henry completes his first year as Green Dot’s president and CEO, he warns that the bank’s success in 2020 has set it up for greater challenges in 2021.

The GO2bank challenger platform, announced at the end of the third quarter, has so far exceeded management’s expectations and represents the beacon to the company’s long-term future. And while the company performed well in 2020, it benefited heavily from prepaid card customers’ use of government stimulus funding.

“The federal relief programs that helped us deliver better than expected results in 2020 have created a headwind to our revenue and earnings in 2021,” Henry warned during a fourth-quarter earnings call.

Green Dot also benefited from an increase in consumers shopping online and the launch of its GO2bank.

“The results we’re seeing with GO2bank are very promising and exceeding our expectations, “ Henry said. “For example, more than half of our customers have opted in for overdraft protection and applications for our secured card are 20% higher than our original forecast. This level of demand gives us confidence in our strategy and our continued investment to market and expand this product.”

But on a running quarterly basis during 2020 for both of these metrics, Green Dot showed quarterly declines, reflecting similar downward quarterly performances in 2019.

“Gross dollar volume in the quarter was also boosted by a second round of stimulus funds received late in December, which added approximately $570 million during the last two days of 2020,” said Jess Unruh, interim chief financial officer and chief accounting officer at Green Dot, in the earnings call. “Our gift card revenue has been negatively impacted by the decline in retail foot traffic because of COVID.”

Henry called the performance of its PayCard unit “our Rocky Balboa story for 2020” as the sales team doubled down on its efforts to add roughly 1,300 new corporate clients in 2020 boosting the unit’s revenue for the year by 6% in what had been expected to be a down year.

Overall, Green Dot reported a net loss of $24 million for the fourth quarter of 2020, representing a loss per share of -$0.45. However, after accommodating an impairment charge, Green Dot’s adjusted non-GAAP net income was $17.3 million which gave it an earnings per share of $0.31, allowing it to beat analyst expectations of $0.18.

Looking forward to 2021 performance, Henry shared a meek forecast and emphasized the company’s dependency on government stimulus funds. The guidance incorporates only the late-December relief package that has stimulus funds through January, and the supplemental Federal unemployment benefits of $300 per week through March 2021.