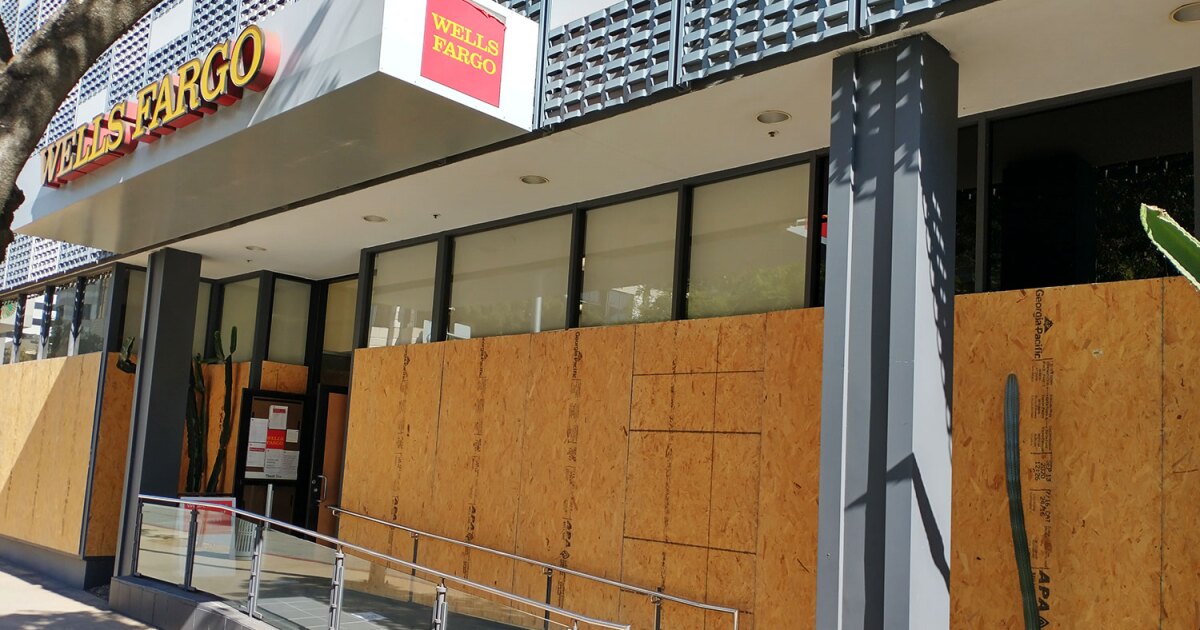 Taking precautions for civil unrest that could occur after Election Day, banks and credit unions in some cities are boarding up branches and closing early, and others are prepared to do the same if the situation tips toward chaos and violence.

Among the nation’s four biggest banks, only Wells Fargo would say on the record that it is actively placing plywood over glass windows. But others are taking similar steps in an attempt to get ahead of any disturbances that may erupt as the results from a highly contentious presidential race begin to pour in from around the country.

In the nation’s capital Tuesday, several banks had secured local offices with plywood including JPMorgan Chase, Capital One, M&T Bank and Amalgamated Bank. In downtown Dallas a day earlier, workers were seen boarding up a JPMorgan branch that anchors a high-rise building; nearby retailers such as Neiman Marcus were also being secured.

Two of the nation’s largest credit unions, Navy FCU and Boeing Employees Credit Union, which does business as BECU, have not closed branches yet but have not ruled it out, either. Representatives for both institutions said management will continue to monitor the situation in the communities those credit unions serve and would adjust operations as needed.

“We have a communications system in place for alerting both employees and members should we have to close any Neighborhood Financial Centers out of an abundance of caution,” a BECU representative said by email Tuesday afternoon.

Some credit unions, however, are taking precautions. In Washington, National Institutes of Health Federal Credit Union boarded up a branch on Pennsylvania Avenue, along with an external interactive teller machine at the facility, said Steve Levin, vice president of marketing and business development at the Rockville, Md.-based credit union.

“We had some vandalism, for lack of a better word, when the George Floyd protests occurred, so out of an abundance of caution our property manager boarded up the entire complex,” Levin said Tuesday. “We don’t know what’s going to happen today, so we decided to close the branch an hour early. We’ll figure out later today or tomorrow what we’re going to do in terms of opening tomorrow, and we’ll be watching the news very closely.”

As of midday Tuesday, federal banking agencies — including the National Credit Union Administration, the Office of the Comptroller of the Currency, the Federal Reserve Board and the Federal Deposit Insurance Corp. — had offered no advice on how to handle branch security this week. Two industry trade groups, the American Bankers Association and the Independent Community Bankers of America, declined to comment.

Regional banks are also preparing for unrest. Truist Financial in Charlotte, N.C., said it is temporarily closing an unstated number of branches “out of an abundance of caution” in neighborhoods where its retail neighbors are closing up shop. At the same time, Citizens Financial Group planned to close branches at 3 p.m. Tuesday, one hour earlier than normal. It is the first time the Providence, R.I.-based company has closed branches early on Election Day.

It is an unprecedented move for the industry, which was caught off guard earlier this year when protests over racial injustice turned violent in some U.S. cities and caused millions of dollars in damage. After the Memorial Day death of George Floyd in police custody in Minneapolis, Wells Fargo branches were set ablaze in Minneapolis, Philadelphia and Portland, Ore., while additional locations in California and Georgia also sustained damage.

In September, two Minnesota men pleaded guilty to conspiracy to commit arson in connection with the fire at the Wells Fargo branch in Minneapolis.

One of the men, Marc B. Gonzales, admitted to pouring gas from a plastic canister onto the building while a crowd chanted “Burn it down!”

John Friedlander, senior manager of Kroll’s security risk management practice, said he has never before seen banks take such measures leading up to a local or federal election.

But “it’s obviously warranted” based on previous riots, he said.

“For those with branch locations that are foreseeably in the pathway of protest activity or those that were victimized previously, it would be prudent for them to implement such measures to prevent vandalism or intrusion,” Friedlander said.

It’s not just banks that are boarding up in many urban areas. Lots of other retailers are doing the same, and like their retail neighbors some banks have decided to take no chances this time.

In some cases, the decision to board up buildings is being made by landlords, leaving banks no choice but to temporarily close affected branches. In other situations, banks are acting independently to protect their offices and safeguard their employees and customers.

On Tuesday morning in Washington’s Farragut Square, a normally bustling commercial district about two blocks north of the White House, parking was severely restricted and nearly all retail establishments were boarded up. Some of the bank branches in that area were still open for walk-in business but several, including the boarded-up JPMorgan and M&T branches, were closed for the day and perhaps longer.

A Bank of America branch across the street from boarded-up United Bank and Amalgamated branches on K Street was operating normally, with no plywood on its windows, as were nearby PNC Bank and Citibank branches.

M&T, based in Buffalo, N.Y., not only boarded up some branches in the Washington area, but it also had to temporarily close three of them as building landlords decided to secure their properties, a bank spokesman said. The bank encouraged customers to visit the M&T website to check the hours and status of other branches.

A spokesperson for New York-based Amalgamated Bank said the decision to board up its Washington branch near the White House was the landlord’s. The branch has only been open on Wednesdays because of the coronavirus pandemic. Amalgamated has been in touch with customers about what services would be available this Wednesday, with the hope that the boards will be taken down before the following Wednesday.

In an upscale shopping district in Pasadena, Calif., a Wells Fargo branch was open for business Monday even though the windows were covered with plywood. The number of boarded-up Wells Fargo branches nationwide is small, a bank spokesperson said.

“Like many companies, we are aware of concern about the possibility of post-election demonstrations this week,” the spokesperson said in an email. “And we are closely monitoring events with the safety of our employees and customers top of mind.”

“Any branches that have been boarded are operating normally, unless they were already temporarily closed due to COVID-19,” the spokesperson added.

Some banks located along the same Dallas corridor as the JPMorgan branch that was being boarded up were not battened down, including Comerica’s headquarters across the street.

“Comerica’s top priority is to ensure the safety of our customers, employees and communities,” a spokesperson for Comerica said in an email. “Our business-continuity team continues to actively monitor events across all our markets to determine if any necessary actions are needed. Conversations remain ongoing ,and we stay prepared for the ever-changing circumstances.”

Citizens is among the companies prepared to take even more action should the need arise.

“As with many organizations, we are monitoring the external environment closely and taking prudent steps to ensure that impact on both business operations and potential property damage are minimized,” a Citizens spokesman said in an email. “This includes making plans to board up branches in select areas where there is the potential for disruption. We will continue to monitor the situation in the coming days and are prepared to take additional steps as appropriate.”

As for how long banks and others stay boarded or closed, it’s anyone’s guess, Friedlander said.

“It’s going to depend on the immediate aftermath, either overnight or as the week extends into the weekend,” he said. “Then it will be the responsibility of the individual bank to determine its threat level” as election results become clear and banks monitor their own risk.

“It’s possible that it will be several weeks’ duration,” Friedlander added.

Alan Kline and Aaron Passman contributed to this article.