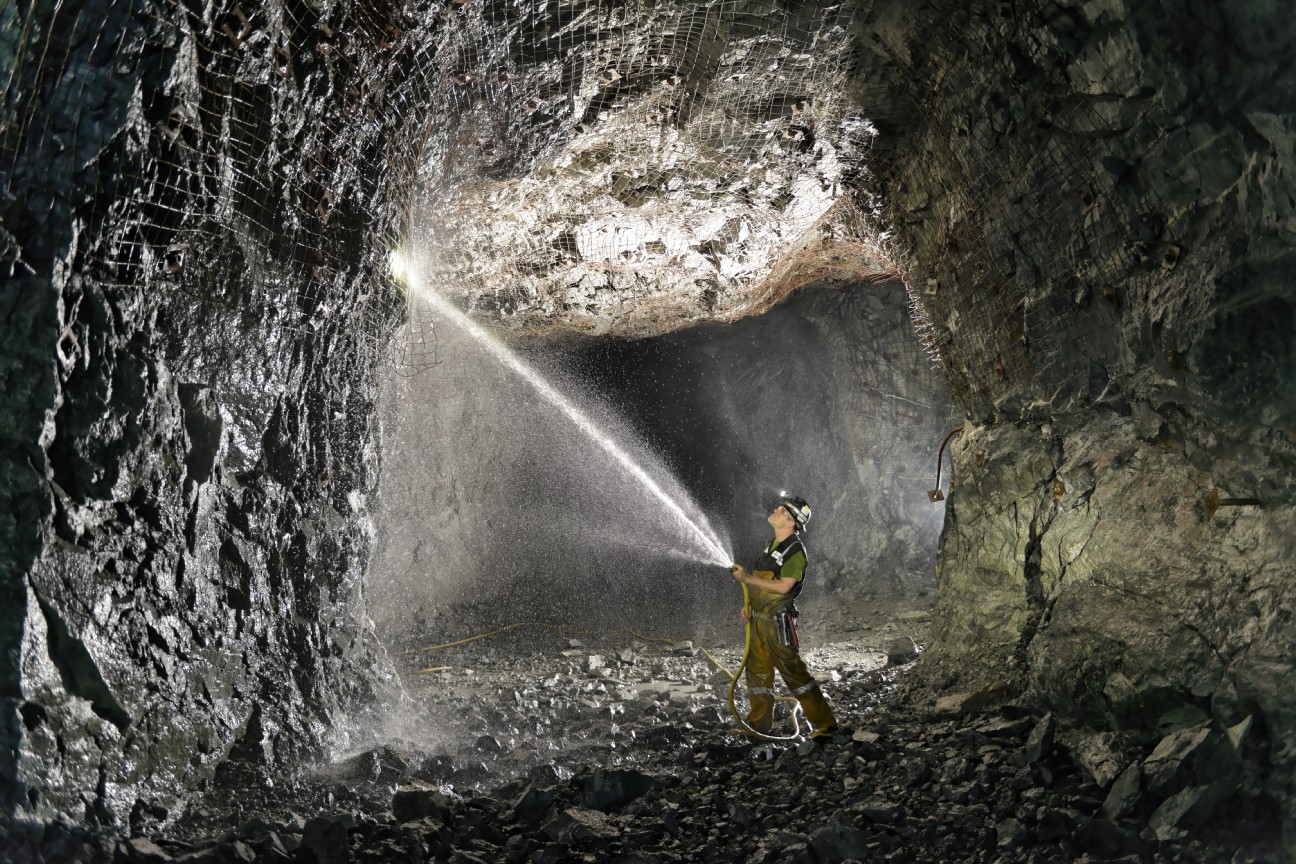 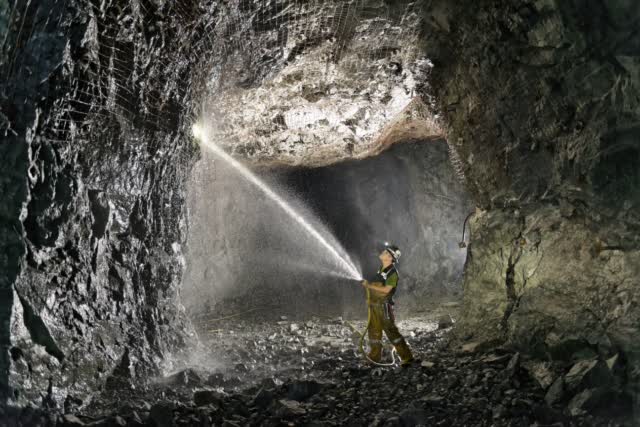 The investment thesis is a difficult one. I do not see Coeur Mining offering a massive residual upside left at this stage, and I have an overall hold rating on the stock unless I see some renewed bullishness in the gold and silver sector.

The best way to profit from CDE is to trade it short term in correlation with the future price of gold and silver while keeping a minimal long-term position.

The stock had an impressive increase since early July and is following the iShares Silver Trust (SLV).

Below are the historical data for both primary gold mines

In Mexico, the Palmarejo mine bounced back this quarter after being down for about 45 days during the preceding quarter. The increase in production this quarter was due to higher throughput, which averaged over 5,300 TPD.

Note: Palmarejo has a streaming agreement with Royal Gold (RGLD), and “approximately 35% of Palmarejo’s gold sales in the second quarter, or 5,988 ounces, were sold under its gold stream agreement” for $800 per ounce. It explains why the gold price realized was $1,754 per ounce.

However, Kensington mine production was weak this quarter but was compensated by record production and cash flow at the Wharf mine.

Also, Metalla (OTC:MTA) announced on June 30, 2020, the completion of the Wharf Mine Royalty acquisition,

for total consideration of $5.77 million, consisting of $1.0 million in cash and the issuance of 899,201 Metalla common shares. 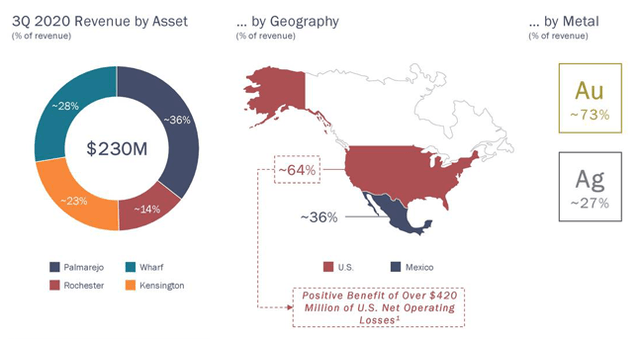 Note: Coeur owns 20,965,241 common shares of Metalla or approximately 15.9% of its issued and outstanding common shares.

Coeur Mining produced 95,995 Au Oz of gold and 2.612 million ounces of silver during the third quarter. Average realized gold and silver prices for the quarter are $1,754 per Au Oz and $24.15 per Ag ounce, respectively.

Mitchell Krebs, the CEO, said in the conference call:

we ratcheted up our momentum in exploration and are now on pace to invest over $50 million company-wide this year. We continue to view this as an excellent capital allocation decision that has tremendous potential to grow our near-mine resource base, generate new discoveries, and lead to larger reserves and longer mine lives.

Coeur Mining: Financials And Production In 3Q 2020 – The Raw Numbers

Coeur Mining posted $229.7 million revenue with an EBITDA gain of $76.91 million and cash flow from operating activities of $79.46 million.

Coeur Mining’s free cash flow for the third quarter of 2020 indicates a profit of $56.5 million, and yearly free cash flow is a loss of $37.9 million. 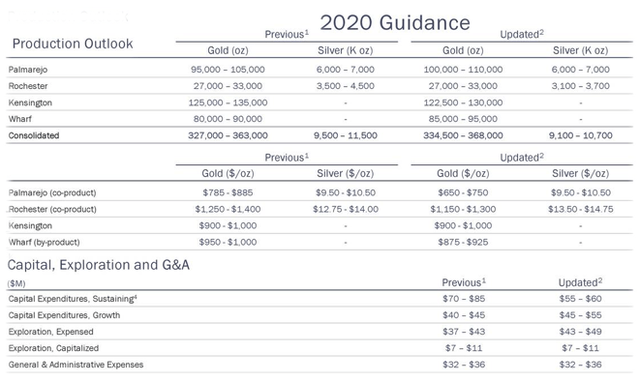 Coeur Mining is a solid gold and silver play but, I believe it has reached a fair valuation, and any upside from here will be quite limited unless the gold price turns very bullish again.

The stock had a sharp increase starting July this year, but after reaching over $9 briefly, it is now plateauing, searching for a new direction.

In short, the stock has lost its investors’ appeal and is drifting a little down following what the gold price is doing lately. Short term, I see CDE struggling to stay above $7.50. 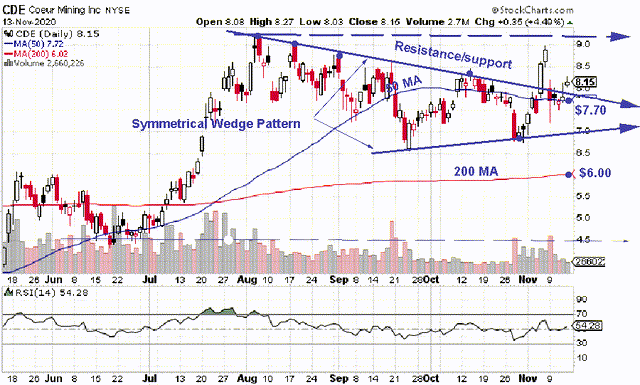 CDE experienced a breakout of its symmetrical wedge pattern in early November and nearly missed its August top resistance at $9-$9.25.

I recommend selling about 50% of your position at or above $9.

The first potential support now is the range $7.70-$7.80, but depending on the gold and silver prices, it is prudent to wait for a more pronounced retracement between $7.00 and $6.50 to start accumulating again.

If the gold price drops well below $1,800 per ounce, CDE may eventually drop below $5. Caution here.

Author’s note: If you find value in this article and would like to encourage such continued efforts, please click the “Like” button below as a vote of support. Thanks!

Join my “Gold and Oil Corner” today, and discuss ideas and strategies freely in my private chat room. Click here to subscribe now.

You will have access to 57+ stocks at your fingertips with my exclusive Fun Trading’s stock tracker. Do not be alone and enjoy an honest exchange with a veteran trader with more than thirty years of experience.

“It’s not only moving that creates new starting points. Sometimes all it takes is a subtle shift in perspective,” Kristin Armstrong.

Fun Trading has been writing since 2014, and you will have total access to his 1,988 articles and counting.

Disclosure: I/we have no positions in any stocks mentioned, and no plans to initiate any positions within the next 72 hours. I wrote this article myself, and it expresses my own opinions. I am not receiving compensation for it (other than from Seeking Alpha). I have no business relationship with any company whose stock is mentioned in this article.