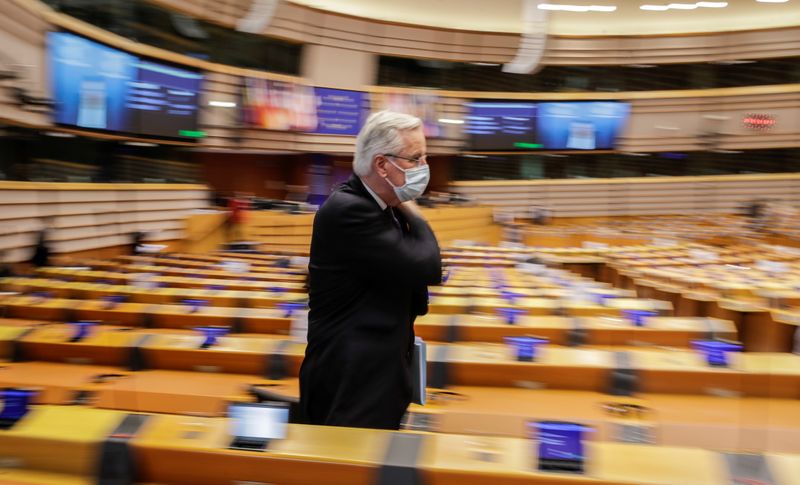 © Reuters. Debate on future relations between Britain and the EU at European Parliament in Brussels

BRUSSELS (Reuters) – Britain and the European Union continued trade talks in Brussels on Saturday, without giving word on any progress made in resolving disagreements over fishing rights and fair competition rules, seen as the main obstacles to a deal.

With less than two weeks to go before Britain finally leaves the bloc’s orbit on Dec. 31, the two sides are under pressure to agree on a new relationship to safeguard almost a trillion dollars worth of trade from tariffs and quotas.

Talks continued at the expert level on Saturday in Brussels, an EU official said.

EU Brexit negotiator Michel Barnier had said on Friday that “just a few hours” remained to reach a post-Brexit trade deal. He cited “extremely difficult” negotiations over how the EU could retaliate if Britain backpedalled on production standards to win a competitive edge for its products, or if Britain cut European fishermen off from its fishing waters in the future.

European Parliament on Saturday repeated its call for a deal to be reached no later than this weekend, to give it time to properly ratify the agreement.

David McAllister, head of the parliament’s Brexit group, said the chamber could hold an emergency plenary on Dec. 29 if a deal was struck no later than this weekend.

“This requires that on Sunday evening at the latest we get a text, in order to start our prepared measures and work,” he told German broadcaster NDR.

The EU has long said it wants to safeguard the parliament’s right to exercise democratic oversight by voting on any deal sealed by the EU and UK negotiators.

However, if a deal arrived later than this weekend, the 27 EU member states could still endorse it on their own to allow for “provisional application”, a scenario that would be likely to upset European lawmakers.

Target to spend $4 billion a year to speed up delivery...