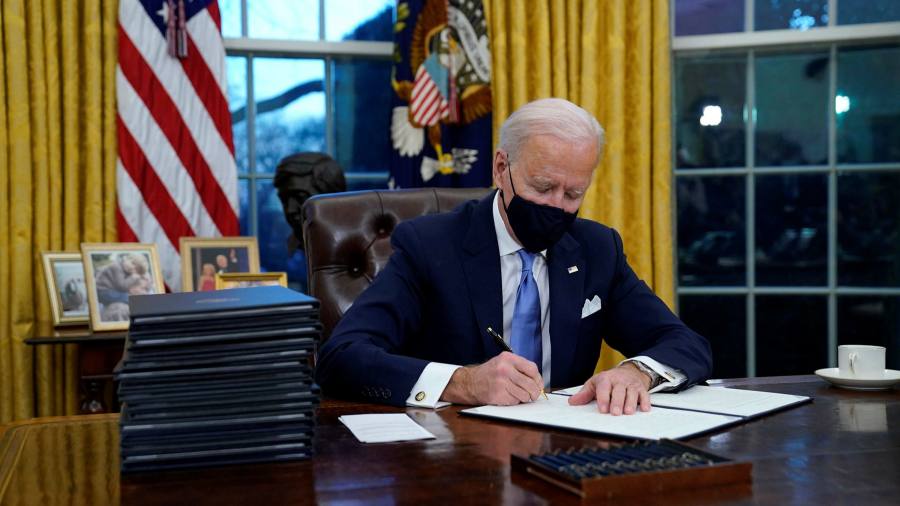 Joe Biden, the US president, has taken executive action to bring the US back into the Paris climate accord, signalling a big break with the administration of Donald Trump on handling the climate crisis and a return to multilateralism.

The move fulfils one of Mr Biden’s core campaign pledges as he fended off liberal challengers during the Democratic primaries and sought to mobilise many of his party’s voters who have become increasingly concerned about the impact of climate change.

It came as Mr Biden made his debut in the Oval Office, wearing a mask, with a stack of executive orders on his desk to begin unwinding the policies of the previous administration. Mr Biden refrained from making any extensive remarks during the signing of the actions in a sign of the less boisterous approach to policymaking that he is expected to take.

According to an administration briefing note, Mr Biden has signed the necessary “instrument” to rejoin the agreement, which will pave the way for the US to officially become a party to the compact within 30 days.

America’s return to the Paris climate accord had been widely anticipated and will be welcomed by many countries around the world. John Kerry, the former secretary of state and now presidential envoy for climate change, said the move would restore “America’s credibility and commitment — setting a floor, not a ceiling, for our climate leadership”.

The Paris deal, signed by almost 200 countries, aims to limit global warming to well below 2C through a concerted effort by individual countries to reduce emissions.

As well as seeking to reverse Mr Trump’s disregard for tackling climate change on a global level, he has also vowed to reverse the environmental deregulation pursued by his Republican predecessor at home.

One of Mr Biden’s first executive actions on Wednesday also included scrapping the permit for the Keystone XL oil pipeline connecting the US with Canada. 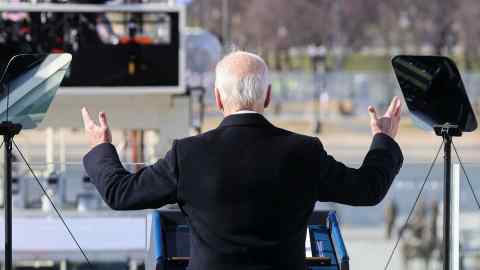 Environmental groups and some business groups cheered the decision to rejoin the Paris climate accords, but congressional Republicans said energy costs would rise as a result of the decision, as the new president felt the first backlash to his policy agenda.

“The Biden administration will set unworkable targets for the United States while China and Russia can continue with business as usual. It will result in spiking electricity bills and higher prices at the pump,” said John Barrasso, a Republican senator from Wyoming, in a statement.

Among the other significant executive actions taken by Mr Biden on Wednesday included cancelling the entry ban on citizens from certain Muslim-majority countries introduced controversially by Mr Trump in 2017, and a move to halt the US withdrawal from the World Health Organization.