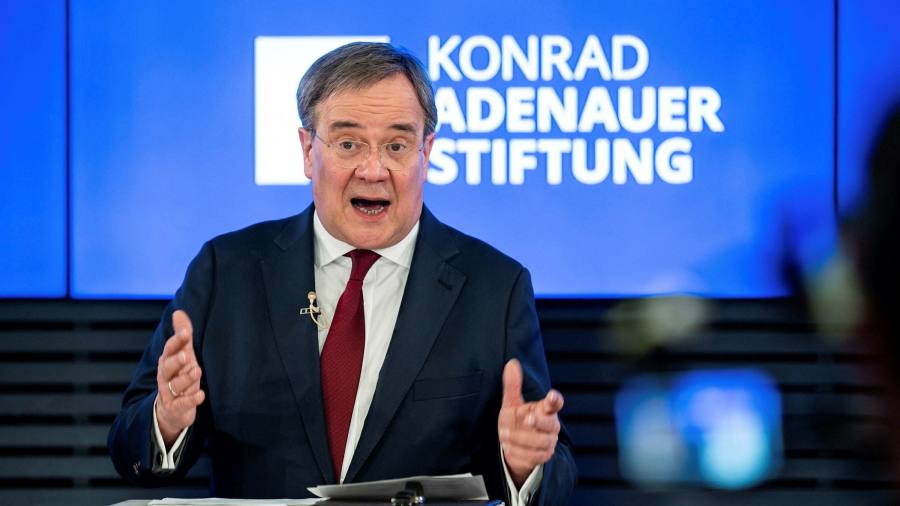 Armin Laschet, one of the frontrunners to succeed Germany’s chancellor Angela Merkel this year, has called for the creation of a national security council as part of a more “proactive” foreign policy.

Laschet made the proposal in his first big address on foreign and defence policy since being selected last month as the centre-right’s candidate for chancellor in September’s Bundestag election.

Laschet called for a “more strategic” approach to international affairs to improve Germany’s resilience to crises, terror attacks and pandemics. It was not enough to “just react to crises — we have to become proactive”.

That could be achieved by creating a national security council, headquartered in the chancellery, which would pool the “expertise of the entire government in the decisive moments for our country”. Under his proposal the council would formulate a “national security strategy” and present it in the first year of each parliamentary term.

Laschet suggested he would be aligned with the Merkel era on most policy issues, endorsing her approach to relations with Russia and the US and voicing support for the controversial Nord Stream 2 gas pipeline from Russia to Germany.

Like Merkel he emphasised the importance of close economic relations with China, which he identified as a “partner, competitor and rival”, and he backed the ratification of the investment agreement the EU struck with the country at the end of December.

But Laschet also criticised the sanctions Beijing imposed in March on European lawmakers in retaliation for EU sanctions against four Chinese officials involved in human rights abuses in Xinjiang, and implied the investment deal could not be ratified unless the measures are lifted.

“If you want to be [our] partner, you have to show mutual respect,” he said. “So on that issue I would like to see movement on the Chinese side.”

Laschet, who was elected leader of the governing Christian Democratic Union in January, also insisted Germany must fulfil its Nato commitment to spend 2 per cent of its GDP on defence, a target it has consistently missed. The Greens, which are polling at more than 20 per cent just behind the CDU, and are widely expected to be part of the next German government, have long been sceptical about the 2 per cent goal.

Laschet acknowledged that it would be “very ambitious” to reach the target after a pandemic that has blown a hole in the country’s public finances. “But our security and the need to arm and equip the Bundeswehr shouldn’t be at the back of the queue,” he said.

Speaking at a virtual event hosted by the CDU-affiliated Konrad Adenauer Foundation, Laschet delivered a strongly pro-European message, calling for a “core Europe” of countries which were prepared to pursue a more forceful EU foreign policy. That vanguard could initially be formed by Germany and France, he said, though others were free to join.

He also said the EU must develop security ties with post-Brexit Britain and revive the transatlantic relationship, calling for a “great free trade zone” between Europe and the US and a common policy on climate change. Echoing the chancellor, he also made a strong appeal for multilateralism and the reform of international institutions such as the UN.

Laschet described Hungary’s recent behaviour in the EU as a “core problem of European foreign policy”. Budapest was the only member state to block a common statement urging implementation of a ceasefire in the Middle East.

“I think that we gradually have to move towards qualified majority voting in [EU] foreign policy,” he said.